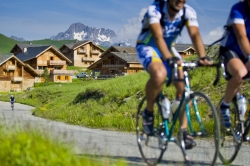 
Every day during the summer season, an average of 400 cyclists make the climb of the 21 hairpins bends. Every yeay, la Marmotte gathers more than 7000 people.

Alpe d’Huez and the 21 hairpin turns remain the most challenging and well known stage of the Tour de France. Each of the 21 turns are marked to help cyclists count-down the 9 miles, and 3,670ft of elevation difference, with an average slope of 7.9 %. Each day during the summer, an average of 1000 recreational and expert riders climb this mythical ascent together. More than 7000 cycle tourists participate in the Marmotte Race with the first 2000 recieving a diploma with their official climb times.

Alpe d’Huez really is the Mecca of cycling, and the ascent to Alpe d’Huez is truely a once in a lifetime experience! 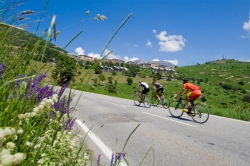 After a warm-up on the straight roads of the Oisans valley, you reach the foot of the famous ascent of Alpe d’Huez. 10 minutes afterer crossing the starting line, you’ll get to the heart of the matter… no more flat stretches. Starting from 737m, the first severe slope takes you to turn 21 (806 m) and continues with a fearful climb up to turn 17 at 965m. Once you’ve passed this bend, you can recover on the 200m gentle slope crossing the village of La Garde. At this point, the serious cyclist get a boost and pick up speed, while others huff and puff untill turn 15 (1025m) where the slope gets steeper again. Turn 14 is marked with a monument dedicated to Joachim Agostino which gives you the confidence and strength to continue.

A gentle slope will take you to “Ribot d’en Bas” (Below) after of which you’ll understand why next hamlet is called “Ribot d’en Haut” (on top). Turn 12 welcomes you at 1161 m and string of bends 11/10/9 is the consecration of your condition whatever it may be. The last moment of lower difficulty, your arrival at Sainte-Ferréol (1390 m – cemetary of Huez) where those in distress can quench their thirst. Next, the ascent to of the village of Huez.
From bends 5 to 2, you get to the heart of the matter again untill the crossing known as the “Patte d’oie” crossing, where the 3 last bends are linked on a slope similar to the first part of the ascent to La Garde.

The climb to the resort ends with turn 1 (1713 m) which is very wide, before you come to “Vieil Alpe” (the old village section of Alpe d’Huez), and pass through the tunnel. Up by chalet “Le Camigane” you are cheered up by the red flame marking the last kilometer until the final segment, gently flater between the two roundabouts. 300 meters left and you’ll have conquered the 21 mythical bends of Alpe d’Huez. 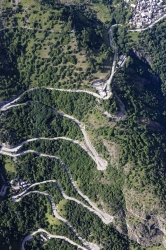 Even in winter, in cold and dry weather, it’s not unusual to be able to ride your bike at Alpe d’Huez

The starting line is situated in front of the EDF building, 984ft after the Grenoble-Briançon roundabout right out of Bourg d’Oisans.

After the last roundabout, on your left, the last 984ft of the Avenue du Rif-Nel stretches out in front of you. The finish is at the end of the avenue.

When ascending the Alp, you’ll turn your back to the Taillefer. On your left you’ll see Villars Reculas and in the last bends you’ll face the Grandes Rousses Massif. When descending, you’ll enjoy the view of the Oisans Valley.

From May to September, Alpe d’Huez Tourism will present all the touring cyclists ascending the 21 bends, more than 2000 diplomas of the ascent of Alpe d’Huez (by foot or by bicycle), certifying the time of their ascent. This diploma is offered for a small fee of €1, the total amount collected will this year be remitted to the European Association against leukodystrophies.